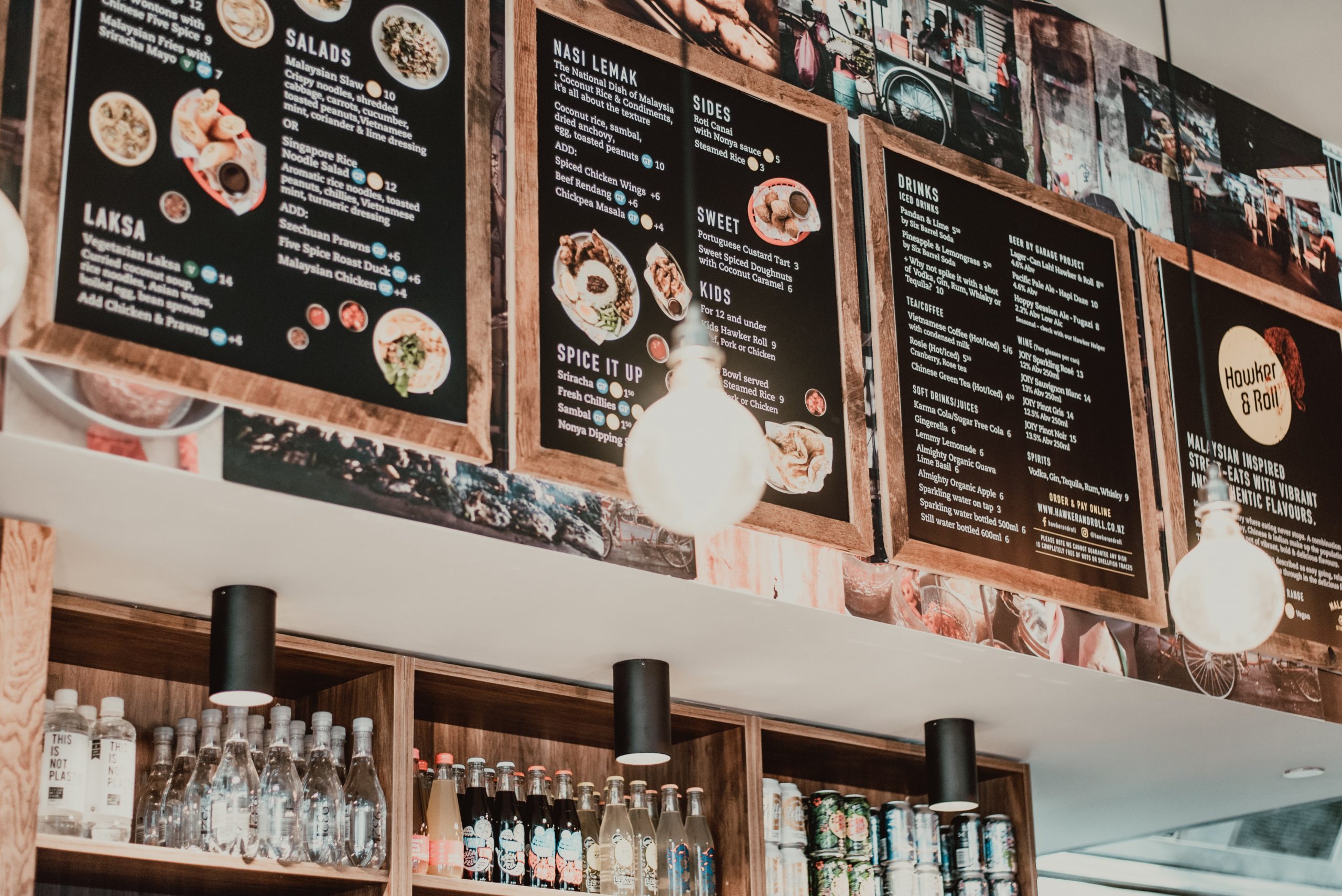 Daljit Singh Johal, a data scientist at MCA, gave one of the most fascinating, and practically useful, sessions at the latest Restaurant Show.

He was reporting the results of the his company’s recent Menu and Food Trends Report which covered developments in menu engineering and menu composition.

Below we outline what was revealed by the latest report about how to maximise your profits using your menu and also recap on some of the basics of menu design.

First of all, Johal reported on the trends regarding psychological pricing strategies. He showed us that, for menu items priced at £25 and above, the majority (47%) of price points ended in £##.00.

The £##.95 is still the most popular price point of all

However, for less-than-£5 items, the most popular price tag was the £##.95 (27%). And indeed, this was the case for all priced items (at all middle price levels about a third of prices had this price point) except those with a tag of £25 or over, and even at this level the £##.95 tag was the second most popular.

However, although the most popular, £##.95 is on the decline

Dish description strategies – the more words the higher the price

Of course, if you can harness the power of the customer imagination, you can dare a price hike.

An average dish price of £6.46 had an average number of descriptors of one.

At the other end of the scale, and average dish price of £16.09 had an average number of descriptors of ten!

Johal gave some examples to illustrate this.

“At the other end of the scale, and average dish price of £16.09 had an average number of descriptors of ten!”

The descriptive phrases are very important

Johal explained (and this makes absolute sense) that the choice of descriptors is absolutely essential.

“Don’t use overly superlative descriptors – ‘the world’s greatest X or Y’ – the customer sees them as insulting”, he advises. “But, yes, to anything that is vivid and evocative”.

‘Fresh’ is the most popular descriptor according to the report, followed by ‘sweet’. But thereafter, Johal notes, “It seems that anything relating to texture seems to be particularly effective”, with ‘crispy’ doing particularly well, as well as ‘creamy’ and ‘soft’. Also popular are ‘tender’, ‘crunchy’, ‘chunky’ and ‘breaded’.

“It seems that anything relating to texture seems to be particularly effective”, with ‘crispy’ doing particularly well, as well as ‘creamy’ and ‘soft’”

If you are looking for proof of a gullible public, then it’s interesting to note that the more expensive dishes had ‘recommended’ as the most popular appended phrase – with no stipulation regarding who by. This was followed in frequency by ‘finest’, ‘matured’, ‘distinctive’, ‘traditionally’… and finally by ‘chef’s’…

“In his book The Omnivorous Mind, the neuroscientist John S Allen notes that simply hearing an onomatopoetic word like ‘crispy’ – which the chef Mario Batali calls ‘innately appealing’ – is ‘likely to evoke the sense of eating that type of food.’ The more tempting the language the more strongly one rehearses the act of consumption. The economist Tyler Cowen argues one should resist such blandishments and order the thing that sounds least appetizing on a menu. ‘An item won’t be on the menu unless there’s a good reason for its presence,’ he writes, ‘if it sounds bad, it probably tastes especially good’.”

Menus were also being reformatted with upsells being moved from boxes at the bottom of a page, to more visible boxes at the side.

Eye-catching images are included together with items which the restaurant wants to push.

Prices are being integrated with the description of a dish, rather than displayed to the right in a list in order to prevent the customer focusing on them too much.

It was not reported by the MCA report, but some other sources (still to be substantiated) suggest that spelling out the currency, rather than adding a pound or euro sign will result in your customers spending more… they don’t feel that they are really spending money.

Some basics of menu design

All the information above should be seen in the context of what is already know about menu design.

Moving upsells from boxes at the bottom of a page towards the upper-side is consistent with what menu engineers call ‘the golden triangle’. The wonder is that more restaurants haven’t been doing this, but it does show the increasing professionalism in the industry.

Research (yet to be fully substantiated) shows that the majority of customers will look first at the centre of a menu, then move their gaze to the top right corner, and then across to the top left. These points on the menu are referred to as ‘sweet spots’. This is the area where the most profitable items on the menu should be.

Where you have a list, put the top-selling items as the first and second. The last item on a list is also popular.

The number of columns gives a subconscious message: one column is more formal and elegant, two is more fun and friendly.

Bear all of that in mind, but ensure your menu is easy to navigate… it shouldn’t be so complicated and extensive that your customers feel confused and exhausted. Remember that the word ‘menu’ is derived from the latin, ‘minutus’… ‘made small’. It should be a summary, not a novel!

Make sure, especially if your clientele is older, that the print isn’t too small to read. Make sure also that it isn’t so big that its difficult to manipulate.

Remember that colour has strong unconscious associations too. Red and yellow are primary food colours – think strawberries, cherries and lemons. Research (again to be substantiated) has proved that food – and drink – is more appetising served on orange. Green is associated with freshness.

The popular £##.95 price tag reported by the MCA report is the most used internationally – this isn’t just the response of a British psyche!

If you include some expensive dishes in your menu, you may not sell many, but you will make the rest of your menu seem very good value. You may end up selling more sides.

Take care not to underprice – studies have shown that customers perceive the same food at a higher price to taste better!

Try out some of the dishes… take images for Instagram. Look at how the food is arranged on the plate… look at the plate itself, your cutlery. Does the dish really look as if it is worth its price?

Never forget that your menu is one of your most important, if not the most important, ways of communicating with your customer. This is even more the case when most menus are online. Make sure your online version is quick to load, and even quicker to entice.

The menu should do all those marketing things – tell your story, express your brand… it is the visual and verbal representation of your restaurant or outlet’s personality. And it should also reflect your values.

Douglas McMaster’s restaurant Silo, for example, is based on the idea of ‘not having a bin’ – this means that it doesn’t produce any food waste. Instead, food is recycled. For example, the on-site toilets are flushed with waste from coffee machines, and unused vegetables are pickled or fermented. And the menu – no wasted paper – the menu is projected onto the wall.

Ironically, the first menus (still popular), also saved paper. They were written on blackboards (‘cartes’ in French) – dishes selected by customers from the list on the board were ‘à la carte’. Blackboards remained popular during periods of high inflation – prices could easily be reviewed. Now blackboard menus help cut down waste… but they also say something about the restaurant… it’s informal, has a creative, changing menu…

Menus needs regular revision. It’s not just the dishes which should change with the seasons. At the same time do your research – keep tabs on what the competition is up to, as well as what is happening in general in the local area. Keep an eye on what suppliers nearby are doing, are there new products on offer, or waste to take advantage of? Read up on what’s going on in the industry in general. Analyse your sales… what’s been doing well, and what has not?

A good menu can help you maximise your profits…. But, in creative hands, it can also do so much more.

“I’ve always loved the language of the Indian-restaurant menu. Before choosing, I always make sure to read the ‘Chef’s Recommendations’ or ‘House Specialities’, to whet my appetite, if nothing else. I always look for the dishes that have the longest descriptions. These are either the ones with the highest margin for the restaurant or those the chef is proudest of. Even if I don’t end up ordering one, and I rarely do, simply lingering over the menu is a feast itself. Any one of them is likely to be described as ‘an exquisite dish’. The meat they contain is always ‘succulent’, the spices always ‘aromatic’ and the sauces ‘rich and creamy’, ‘comforting and warm’, or perhaps, in between, ‘gently tempered with onions and spices’, which invariably makes them ‘tantalizing’ or ‘mouthwatering’. To read the menu in even a half-decent Indian restaurant is the literary equivalent of being given a tender foot massage. No other cuisine sets out its food offering as such elegant courtship.”

Imagine nature. What does it look like? Where is it? And are you in it? According to the new Degree of Urbanisation reporting…
Domini - Storytelling , Sustainability
Read More

A session at this year’s Restaurant Show exploring ways in which restaurateurs and chef patrons can help their business stand out from the crowd,…
Domini - Storytelling
Read More