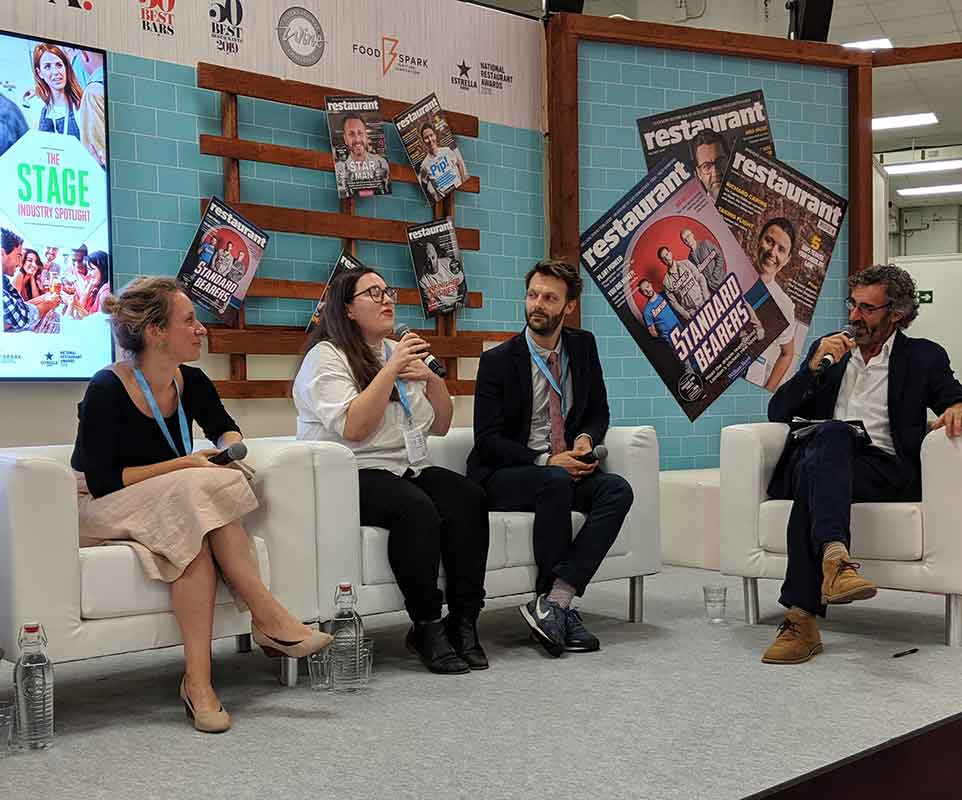 A session at this year’s Restaurant Show exploring ways in which restaurateurs and chef patrons can help their business stand out from the crowd, and boost their brand, through the use of storytelling.

Why your brand needs to distinguish itself

The session was chaired by Richard Fox (on the right of the featured image above) who referred to the MCA report presented earlier in the day, which reveals the fastest decline in the UK restaurant market in seven years. Additionally, Fox points out, there are now a staggering 80,000 restaurants within the M25. “You have to be good as a chef just to survive. Competition is rife,” he says, “and the most effective way to give your restaurant the edge is to tell your story to your customers – to unearth the extraordinary and the outstanding, and to introduce them to your values, whether ethical, vegan, environmental, British…. whatever they are, they need to be genuine, to be authentic. You have to add value – you need to have something to say.”

Your story can be told, Fox continued, via social media, or on your website; or through your branding.

“You have to be good as a chef just to survive. The most effective way to give your restaurant the edge is to tell your story to your customers – to unearth the extraordinary and the outstanding.”

Your personnel are a rich source of stories

Food anthropologist, Katrina Kollegaeva, expanded on this theme to say that the definition of ‘story’ was important. “It’s no longer enough to just outline the concept of your restaurant, or tell the story of the founder. That can be too self-centred, and sound pompous and it puts people off.” Kollegaeva recommends telling the stories of your suppliers, and about the produce that is selected. Additionally, “Instagram can tell the stories of your personnel – your employees’ experience at work reveals a lot about you.”

Ariana Ruth, Editor of Table magazine, is an American, now living in London. Fox asked her if Americans are better at telling their story… blowing their own trumpet than the British. To the surprise of the audience Ruth said she didn’t think so. “When I arrived here seven and a half years ago,” she recalled, “I was impressed to discover Borough Market, and all the stall holders there who were clamouring to describe what went on behind the scenes, they were happier to come forward than their American counterparts.” Each had, she said, their own experiences, and it was these that separated them from everyone else. Kollegaeva agrees. “Your biggest ambassadors are your employees. Don’t forget the people who are working at quite a low level in the kitchens.” (For a colourful description of the life of a plongeur, Fox recommends reading Orwell’s Down And Out in Paris and London).

“Your biggest ambassadors are your employees. Don’t forget the people who are working at quite a low level in the kitchens.”

Use the whole value chain, from farm and sea to plate, as a source of stories for your brand

Kim Rahbek, of Sticks ‘n’ Sushi and also owner of his own farm, Ellevang Farm, said that in his business the whole value chain, from farm or sea to plate, provided a rich source of stories. He explained that in Denmark there is total transparency about where food comes from – and “we put everything on our website”. You can see what he means by clicking on this link. Sticks ‘n’ Sushi also uses some fabulous imagery to back up their story and brand.

Ruth agreed. “Recently I did an interview with Martin Morales, who saw a gap in the market and opened the first ceviche restaurant in London. But just seeing that gap wasn’t enough. He tells the story of how he had to leave Peru when his father was threatened by Shining Path guerrillas. He been cooking since the age of nine.” There’s a lot more information about his background on his website which you can find here.   Food connects everyone” she continues, “I’m following a lot more farmers these days.”

Rahbek expanded. “The partnership between the producer and restaurateur also makes a good story. About five years ago we were looking to source organic green cucumber. My producer could supply it, but not all year round. I promised him that I would give him two years, and, if he could give year round supply then, I would order from him exclusively. He achieved that, and now we buy other ingredients – avocados for example – from him as well as cucumbers. You always need to remember – best is better than price” he concludes.

“You always need to remember – best is better than price”

You can see another very good example of this in the Saucy Dressings post on the Tallinn restaurant, Leib Restoran. Talking about suppliers on Instagram and other social media can be limiting. Websites are useful, or try including a couple of lines about suppliers on menus, but refresh these regularly.

Kollegaeva agreed, but commented that many restaurateurs were quite savvy about this, but suppliers are much less up to date. If they, too, could tell their own stories they could help tremendously with upselling their own products and brand.

And Fox points out that the story can also be about the customer. Another sushi restaurateur realised that it was helpful to reassure pregnant women that sushi with raw fish which had been frozen was safe for them to eat, after his own wife became pregnant.

A strong brand personality can be a story in its own right, comments Fox, but, he warns, as a brand grows it can lose its personality.

Rahbek tells the audience, “we’re now in the midst of a tech revolution, but at the same time we still have to eat – our industry is also the oldest on earth. 30% of our carbon footprint these days is down to food production. We, as restaurateurs, have a responsibility to address this. Sustainability is the greatest story of all.” Rahbek recommends using the menu to promote a restaurant’s support for the environment. “Give up using needless, useless words such as ‘pan-fried’, and instead say ‘the leaves, as well as the roots, of the carrot are used in this dish’”

“we’re now in the midst of a tech revolution, but at the same time we still have to eat – our industry is also the oldest on earth. 30% of our carbon footprint these days is down to food production. We, as restaurateurs, have a responsibility to address this. Sustainability is the greatest story of all.”

Use language with care

Kollegaeva nods. “Language is really important, as is the tone of voice. Avoid using adjectives – ‘succulent’, ‘smoked’ – they are mostly very subjective. Instead use nouns and verbs to give a vibrant picture. Don’t overdo it – often confused customers have no idea what a dish is about. Simplicity is everything – St John restaurants offer a good example of this.” Follow this link to see their brand approach.

“Language is really important, as is the tone of voice. Avoid using adjectives – ‘succulent’, ‘smoked’ – they are mostly very subjective. Instead use nouns and verbs to give a vibrant picture.”

Rahbek adds, “we always use humour on our menus – our most expensive dish is called the ‘Monte Carlo’, and possibly politically incorrectly, a meat only dish is billed as ‘Man Food’”.

Fox asks Ruth (who is also a photographer) whether the décor can help with the story. “A lot of restaurateurs worry that they should redecorate to make their premises Instagram-friendly,” she replies. “I tell them it’s really not necessary – they just need to make sure they provide enough natural light.”

The session was brought to a close with a question from the floor – “what are the key elements to good story telling for your brand?”

Rahbek summed it up for everybody by saying, “my advice to restaurateurs is, ‘just make sure you are a good host’”.

For more on storytelling in the food industry read Katrina Kollegaeva’s article, Why The Art of Storytelling is Invaluable in Retail.

Daljit Singh Johal, a data scientist at MCA, gave one of the most fascinating, and practically useful, sessions at the latest Restaurant Show. He…
Domini - Storytelling
Read More